Ireland and the Cricket World Cup 2007 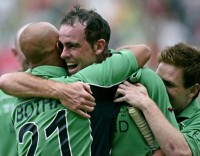 Ireland has rarely been considered a cricketing nation, but the 2007 Cricket World Cup began a new chapter in Ireland’s sporting history as Ireland reached the Super 8 stage of the competition. Ireland arrived in the West Indies with much optimism but few commentators gave them much of a chance.

It was widely expected that the Irish team would make an early departure from the competition and finish bottom of their group. Their qualifying group included Zimbabwe, Pakistan and, hosts, the West Indies.

Ireland were expected to be knocked out at the first stage along with Canada, Scotland, The Netherlands, Bermuda and Kenya; but an early draw with Zimbabwe ensured that Ireland would not leave without a point. When Ireland met Pakistan in their second match, on 17 march 2007, defeat seemed inevitable.

But the result was anything but expected. Ireland produced one of the greatest cricketing victories by beating Pakistan on St Patrick’s Day amid unbelievable tension in Jamaica. Led by wicket-keeper batsman Niall O’Brien, they reached a rain-adjusted target of 128 with three wickets remaining in near darkness. Pakistan were defeated by three wickets and Ireland qualified for the Super 8 with the West Indies still to play in the group. Pakistan were on their way home!

Whilst Ireland would never go on to reach the semi-finals there was still one futher result for the Blarney Army to celebrate. Ireland defeated Bangladesh (who had knocked out India) by three wickets and 74 runs, on 15 April 2007, to record their biggest victory of the tournament.