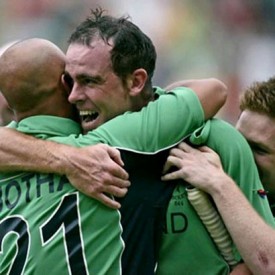 Ireland and the Cricket World Cup 2007

Ireland has rarely been considered a cricketing nation, but the 2007 Cricket World Cup began a new chapter in Ireland’s sporting history as Ireland reached the Super 8 stage of the competition. Ireland arrived in the West Indies with much optimism but few commentators gave them much of a chance.