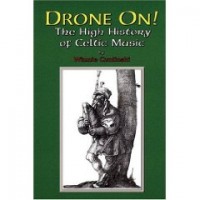 Drone On by Winnie Czulinski

Author Winnie Czulinski invites you to test your knowledge of Celtic culture.

The quiz is an except from “Drone On! The High History of Celtic Music”, a humorous new book by Winnie Czulinski.

Test your knowledge of Celtic culture and music. Grab a pen and a piece of paper and don’t cheat – the answers are at the bottom of the page!

FINGERS AT THE READY… LETS GO!

1) What are the seven “Celtic nations”?

2) What was the most important fish in Celtic mythology?

4) What kind of specialised Celtic song-form was urine used in?

6) What’s the name of the Irish bellows-blown bagpipe, and what does the name mean?

7) Why is the mountain dulcimer sometimes called a stringed bagpipe?

8) What does the Gaelic word “craic” (pronounced “crack”) mean?

9) Which 18th-century blind Irish harper created many “planxties” — and just what is a planxty?

10) Which historical “lady a la moan” wrote the Scottish song “Will Ye No Come Back Again”?

11) What 19th-century American scholar collected so many Celtic folk songs he just had to number them all?

13) When he was almost Baroque, what famous classical composer churned out dozens of arrangements of Celtic folksongs for a big publisher?

15) How many taps per second can famous Irish-American dancer Michael Flatley do?

Winnie Czulinski’s “Drone on! The High History of Celtic Music” is available to buy from Amazon.co.uk. Read a review at Rambles.net

2) The Salmon of Knowledge (or Wisdom)

4) The “waulking” song, sung by a group of people pounding/kneading wet wool treated with urine, to shrink and “full” the fabric. The ammonia in stale urine also helped intensify the colour of the cloth.

5) A distinctive Scottish tune and dance, named for the strath or valley of the Highlands’ Spey River.

6) The uillean bagpipes, and it means “elbow,” as they’re squeezed under the arm.

7) Traditionally played, it has a “drone” – an underlying note that remains the same.

9) Turlough O’Carolan. A “planxty” was a song composed specifically for a patron.

12) English barrister Fred Weatherly, in 1910 (apparently while on a commuter train)

14) Pogue Mahone — the phonetic spelling of this rather cheeky Gaelic phrase. (Later, the band shortened its name to “The Pogues.”)

What did you get? Less than half? Me too, best buy the book! Not only does it give a comical overview of Celtic music it begins with a unique historical and cultural introduction to the Celtic nations.