The story behind the ‘It’s a long way to Tipperary’ song.

With the 100th anniversary commemorations of World War  in mind, Gerry Molumby visits the Warwickshire pub where the conflict’s most famous marching song was written, giving pause for thought…..

I have been reflecting on the origins of its most iconic marching song ‘Its A Long Way To Tipperary.  My interest was kindled by the fact that I hail from the premier county of Tipperay and the pub in which the song was penned is in Balsall Common in the leafy agricultural county of Warwickshire originally called the Plough Inn but renamed The Tipperary Inn.

Harry Williams lived with his family in the pub his father managed. From an early age he showed a talent for writing songs. During his adolescence – confined to a wheelchair following a childhood accident in which he broke both of his legs – he spent most of his time studying music and poetry, becoming an accomplished pianist and mandolin player.

By contrast, extrovert music hall showman Jack Judge, who sold fish regularly outside the pub, struck up a friendship with Harry. Together they went on to compose many songs together in a musical collaboration which has stood the test of time. 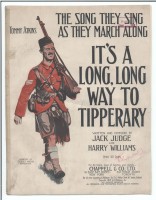 Their partnership lasted fifteen years, during which they wrote thirty two songs. One of them, which started life in 1909 as a nostalgic music hall Irish ballad It’s A Long Long Way to Connemara (where a young Irish emigrant is yearning for his girl in County Galway), was destined to become the most famous worldwide army marching song ever.

Jack was a regular music hall performer and had the lyrics and music of their sentimental Connemara song and could not resist a bet he was given in 1912 while performing in the Grand Theatre, Stalybridge, near Manchester.

A fellow performer challenged him that he could not “come in tomorrow night with a brand new song he had composed overnight”! Jack simply changed Connemara to Tipperary (his grandfather’s home county) and is said to have brought the house down as the curtain fell on the premiere performance of It’s a Long Long Way to Tipperary.

London publisher Bert Feldman promised he would publish the song, but on two conditions. He suggested that they delete one ‘long’ from the title and change the ballad into a marching song for both solo and choral singing. So as the printing presses cranked up in London in 1912, three million copies of the sheet music were printed for sale and
many million more after the War.

Both men earned £164,000 between them. Many would regard that as a fortune today, but then it was an absolute fortune. The money allowed Harry to buy the Plough Inn for his father and they duly changed its name to the Tipperary Inn. The pub stayed in the family for forty years, its walls today adorned to the memory of Harry and Jack.

COMFORT IN THE TRENCHES

During the First World War, Daily Mail correspondent George Curnock saw the Connaught Rangers Irish Regiment singing the song in full tenor voice as they marched through Boulogne on August 13, 1914. Popular Irish tenor of the time, Count John McCormack recorded it two months later. Then the regiments from other countries of the Empire took it ‘home’ with them in 1918 – all of which helped its worldwide popularity and endurance.

Other composers cashed in by writing other Tipperary-themed World War I songs, such as I’m a Long Way From Tipperary, I’m Going Back to Tipperary, and It May Be Far To Tipperary It’s a Longer Way To Tennessee.

Its popularity continued into the Second World War and is up there with other songs of its time like Keep The Home Fires Burning, consoling soldiers who just wanted to return home “to the sweetest girl I know”; it was featured in the 1951 film On Moonlight Bay and the stage show O What A Lovely War, even featuring in U.S. TV series The Mary Tyler Moore Show.

Siobhan Harrison from BBC Warwickshire recorded the radio programme World War 1 At Home from the Tipperary Inn, and local folksinger Wes Finch sang the song in its original ballad format. Listen to the documentary at www.bbc.co.uk/programmes/p01svw1q

It’s a Long Way to Tipperary

Up to mighty London came

An Irish lad one day,

All the streets were paved with gold,

So everyone was gay!

‘Til Paddy got excited and

He shouted to them there:

It’s a long way to Tipperary,

It’s a long way to Tipperary

To the sweetest girl I know!

But my heart’s right there.

To his Irish Molly O’,

Saying, “Should you not receive it,

Write and let me know!

If I make mistakes in “spelling”,

Don’t lay the blame on me”.

To marry me, and so

Leave the Strand and Piccadilly,

Or you’ll be to blame,

For love has fairly drove me silly,

Gerry Molumby inside The Tipperary Inn

Gerry is no stranger to the Celtic and Irish Cultural Society here in Crawley having MC’d our Crawley Irish Festival on numerous occasions as well as bringing his Irish themed shows to the Hawth Theatre under the Triskellion brand.

Gerry Molumby has worked for Irish welfare in Britain, founded Triskellion Irish Theatre Company, directed plays and captured some, stunning photographs from all over Europe.

The Irish-born multi-talent hails from Thurles Co. Tipperary. However in 1980, Gerry relocated to Britain and brought his altruistic attitude with him.  He has been involved in the welfare and cultural scene of the Irish in Britain for over 30 years. he stated.
During this time, Gerry and some co-workers took the public’s welfare into their own hands and established Cricklewood Homeless Concern day centre in London (1983 and gave the group its name!). Now called Ashford Place this multifaceted centre still provides assistance and advice to the homeless or those others inadequately accommodated. The centre offers a range of services, from the simplest advice on day-to-day living to an alcohol recovery project, to community cohesion.

Among his projects, Gerry also writes for several Irish and British publications, including The Irish American Post and is hard at working helping preserve and expand the Irish culture in Britain. In 1996, Gerry founded Triskellion Irish Theatre and Concert Productions in London. Now in a partnership with London-based friend Patrick O’Connell, the company aims to preserve and enliven Irish drama, comedy, and music in Britain. Triskellion has performed numerous classic Irish plays, such as The Playboy of the Western World by John Millington Synge and John B. Keane’s Big Maggie (Keane). At the outset of the company, the production of a play was an involved process from beginning to end. “We cast, directed, made the sets and produced the play from page to stage,” recalled Gerry, who concentrated on directing productions as Triskellion got off the ground. More recently, he has taken on promoting plays and concerts already in production.

“Our main focus now is to act as facilitators for producing Irish plays by touring companies from Ireland and Britain, he asserted. Since the company’s conception, Gerry has led all the concert productions. The acts are perfectly fit for cabarets, Irish centres and festivals. Showcasing some of the best Irish entertainment from Britain’s Irish community, the concerts employ musicians, dancers, actors and comedians to create a dazzling show. The show is based on the model of Sunday Night at the London Palladium and called ‘Celtic Strands’. Together with Patrick they have raised thousands of pounds for charities like CAFOD – Irish Homeless – Church Restoration – British Adoption Agency and St. Luke’s Hospice etc “Basically we bring together a variety of Irish artists, mainly from the Irish in Britain and put on a great show,” according to Gerry. The concerts are not alien to celebrity acts either. Irish luminaries such as Niall Toibin, Philomena Begley, Finbar Furey, Seán Cannon from ‘The Dubliners’, the current premier folk band Na Fianna, have all swayed, sung and serenaded with Triskellion. They are currently touring their “The Rare Oul’ Times,” a two-act Irish play on the lives of Brendan Behan and Patrick Kavanagh (by Ken Mc Elroy) featuring Seán Cannon and Ultan Cowley’s Tribute to the men who built Britain.

Since moving to Nottinghamshire in 1999 with his wife Fiona and son Cormac Gerry immediately became involved as on of the founding members of Nottingham’s St.Patrick’s Day Parade and Festival and produced the open air concert entertainment for 12 years. Gerry led the steering group with set up the Golden Shamrock Club for older people which is now self managed and running smoothly. Throughout all his time in the UK Gerry has .supported the various campaigns of the Irish in Britain ( formally The Federation of Irish Societies ) on cultural, welfare and census programmes and can be credited for many of their quantitive outcomes.

Current Irish interest campaigns for Gerry are – he is leading in Britain on votes for the Irish Abroad (Irish Constitutional Convention 2012-13).
The busy entertainer still finds time for a more personal art. “I have always been a keen photographer and recently I noted the number I had taken over the years and were ‘saved and backed up’, but felt I wanted to share,” he explained. Gerry has photographed all over Europe, though his recently released collection is mostly a product of his Native Island and new home in Nottinghamshire. The ‘snap shot’ of his collection features the opulent greens, steely-gray skies and misted rainbows that one would expect in photography of Ireland. However, the photographic crop also yields abstraction and struggle with the likes of the distorted Ha’penny Bridge reflected in the flow of the River Liffey and a weathered Irish farmer.

The majority of photos in the collection are cheery, colourful images appropriate for display. Catalogue can be viewed on the Triskellion website.