Crawley to commemorate the 100th Anniversary of the 1916 Easter Rising with a special show at The Hawth Theatre.

As Ireland its people and diaspora around the world commemorate the 100th anniversary of the Easter Rising we the Celtic and Irish Cultural Society announce our own contribution as One Easter Morn a special evening of music, song, poetry and prose recalling the events of Easter Week 1916

One Easter Morn in The Studio of The Hawth Theatre on Friday 4th November tells the story of the most significant week in recent Irish History where an ill-fated, poorly planned but determined Insurrection started Ireland’s final push to claim Independence.

On Easter Monday of April 24, 1916, a group of Irish nationalists proclaimed the establishment of the Irish Republic and, along with some 1,600 followers, staged a rebellion against the British government in Ireland. The rebels seized prominent buildings in Dublin and clashed with British troops. Within a week, the insurrection had been suppressed and more than 2,000 people were dead or injured. The leaders of the rebellion soon were executed. Initially, there was little support from the Irish people for the Easter Rising; however, public opinion later shifted and the executed leaders were hailed as martyrs. In 1921, a treaty was signed that in 1922 established the Irish Free State, which eventually became the modern-day Republic of Ireland. 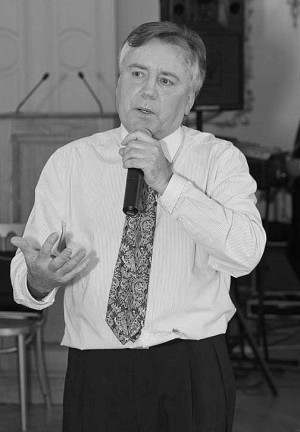 The story is based on one man’s first-hand experience of the days and nights leading up to the capture and execution of the leaders.

With the use of slide projections compare Gerry Molumby of Triskellion Irish Theatre (aka the Master of Ceremonies on the Mainstage at our Crawley Irish Festivals) sets the scene and introduces the show telling the story of Easter Week with live music from Irish Mist with Joe Giltrap on guitar and bodhran and Malcolm Rodgers on fiddle singing the famous ballads now enshrined in Ireland’s music culture of ‘Rebellion’. 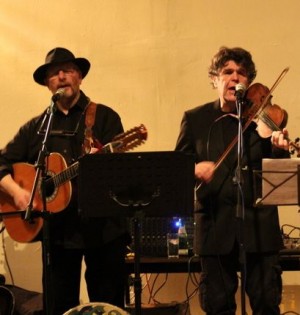 The performance of these period songs marry the historical sources with the emotion evoked through visual artistic expression allowing the audience to experience the story of the Rising in keeping with the ‘Remember’ theme of Ireland 2016.

In keeping with the atmosphere of the show we would like to encourage the audience to attend in period dress of 1916 Dublin. 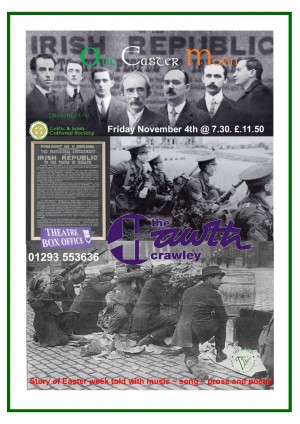