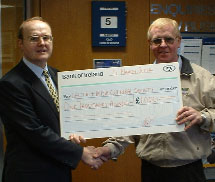 Bank of Ireland confirm support of the Saint Patrick’s Weekend 2004 through sponsorship.

Bank of Ireland is one of the world’s longest established banks. Assets of almost £50 billion and a staff of more than 16,000 make Bank of Ireland Group one of the top 500 businesses in the world. They are a major provider of financial services in key markets of Ireland and Britain, with a significant asset management business internationally.

The Pipe Band perform the Celtic Weave on 13 March, and lead the FDL Saint Patrick’s Parade on 14 March. They will also be performing at the Emerald Club on Friday 12 March 2004. Bank of Ireland Group will sponsor the The New Ross and District Pipe Band throughout the weekend.