The Irish Ambassador to the UK Adrian O Neill addresses and clarifies the Common Travel Area between GB and Ireland.

No matter what happens in the Brexit negotiations, Irish citizens in the UK and British citizens in Ireland will continue to have access to their CTA rights. This has been affirmed by both Governments.

Recent weeks have seen an increasing focus on the Common Travel Area, an agreement where Irish citizens in Britain and British citizens in Ireland can live, work, study freely since before both countries joined the EU. 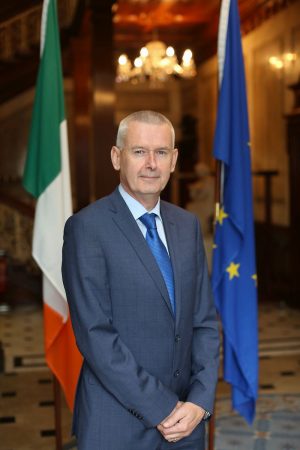 There has been an increasing focus on the future of the Common Travel Area (CTA) in recent weeks. With the UK’s imminent departure from the EU, members of the Irish community living here in Britain understandably want clarity on the arrangements which will apply to them after Brexit.

I want to firstly assure your readers that intensive work is ongoing both with the UK Government and across Government Departments in Ireland to ensure that the necessary arrangements are made in both countries so that the CTA continues to function effectively after the UK leaves the EU – in all circumstances.  No matter what happens in the Brexit negotiations, Irish citizens in the UK and British citizens in Ireland will continue to have access to their CTA rights.  This has been affirmed by both Governments and has been specifically provided for by the UK Government in their “no deal” planning notices.

As readers will be aware, the CTA is a long-standing arrangement between the UK and Ireland, which means Irish citizens can move freely to live, work, and study in the UK on the same basis as UK citizens and vice versa. It provides for associated rights and privileges including access to employment, healthcare, education, and social benefits, as well as the right to vote in certain elections. The CTA is an arrangement that is valued on both islands and the continuation of this arrangement is a stated objective of both the Irish and UK Governments.

Many people have asked if this will be possible after the UK leaves the EU and the answer is yes. Maintenance of the CTA is a bilateral matter between Ireland and the UK and it is recognised in EU law by Protocol No. 20 to the Treaty on European Union and the Treaty on the Functioning of the European Union. This was reaffirmed once again in the Withdrawal Agreement between the EU and the UK, which was endorsed by leaders of the UK and the EU 27 at the European Council on 25 November 2018.

In view of its importance to our citizens, maintenance of the CTA has been one of the Irish Government’s Brexit priorities from the outset. For its part, the UK Government has committed to updating domestic legislation, as necessary, to ensure that the agreed CTA rights and privileges are properly secured. This proofing work, both domestically in Ireland and with the UK, is now at an advanced stage. When this work is concluded, the Government of Ireland – and this Embassy – will update our citizens further without delay.

I know the UK’s proposed Settled Status scheme for EU citizens has been the source of considerable interest and perhaps confusion within the Irish community.  The UK Home Office has already indicated that Irish citizens will not need to register or take any action under the Settled Status scheme (relevant UK Home Office link: https://www.gov.uk/settled-status-eu-citizens-families).   They will continue to hold their CTA rights which are not reliant on EU membership.  However, as EU citizens, Irish citizens – if they so wish – will be able to apply under the Settled Status scheme when it is open for applications.

When the scheme opens and full clarity on the overall context is available, including on the rights provided for in the EU-UK Withdrawal Agreement, it will be important for people to make a fully informed decision on whether they wish to apply having carefully considered all the information and their own personal circumstances. Circumstances which may be relevant include where an Irish citizen has close family members and/or dependents who are neither Irish nor British and hence are not covered by the CTA. Further information on this is available on https://www.dfa.ie/brexit/ and will be added to as more detailed information becomes available

The Common Travel Area has endured for almost a century, long before there was a European Union, and has proven to be flexible and adaptable. That adaptability has proved a strength and has allowed the CTA arrangements to evolve and take account of changing needs and circumstances. This is something which we believe is vitally important to maintain and I look forward to updating your readers and all Irish citizens further on this in the weeks ahead.

Ambassador of Ireland to the UK