Message to the Irish Community from Conrad Bryan on why he is stepping down from ‘Irish in Britain’ board and focusing on going to the United Nations in Geneva.

On the run up to the Irish in Britain AGM in Manchester on Saturday 26th October Conrad Bryan writes on his experiences with the organisation as its first African Irish board member, explaining why he is standing down as trustee and going to the UN. 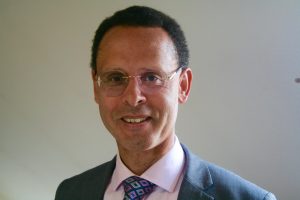 Over the past three years it has been a real honour to serve the Irish Community in Britain as the first African Irish member on the Board of Trustees at ‘Irish in Britain’ (IIB).

My appointment was a quiet affair at the time, but nevertheless it was significant symbolically. It revealed to me that Irish people here in Britain showed a warmth and genuine welcome to one who was different.

The many dedicated Irish people working hard in their clubs and charities across Britain are such an inspiration to me. People like John Nolan, chair of Crawley’s Celtic and Irish Cultural Society, I met on the ‘Irish in Britain’ Board, continue to work hard to look after and keep our communities together. I have learnt so much from them about the welfare, culture, hardships and successes of the Irish diaspora here, whether they just arrived from Ireland or are second, third fourth generation Irish. It has been such a pleasure to volunteer my time to our people here.

However, it is now time for me to move on and I step down from the Board of IIB feeling a great sense of pride in the work we have done and the people who continue to carry the baton for us all, under the wonderful leadership of Brian Dalton, the current CEO.

As some of you know, I was appointed last year as the Chair of the Health Committee of the Collaborative Forum, set up by Minister Katherine Zappone to identify health supports and solutions to help people who were in Irish Mother and Baby Homes. This has taken a lot of my time as well as my work for The Association of Mixed Race Irish (AMRI), a small group within our Irish community who are members of IIB. I would like to briefly tell you about our current campaign at AMRI to go to the UN at Geneva to talk about racism in Ireland.

The Irish in Britain were no strangers to the racist attacks against our people and community in the past. We remember the signs on shops and flats such as “No blacks, no Irish, no dogs” or “Irish need not apply”. So we are as a community particularly sensitive to this sort of attack on people. However, many of us who are mixed-race suffered racism in Ireland and particularly within Irish orphanages and institutions in the past.

Just this month, mixed-race couple Fiona Ryan and Jonathan Mathis, talked on the ‘Late Late Show’ about how they were racially attacked online after participating in a Lidl advertisement campaign with their mixed-race son. This was harrowing for me to hear as one who was brought up in Ireland as the son of an Irish mother and an African father. The couple have since left Ireland because of the death threats and lack of protection from the Gardaí who strangely view this as a ‘civil matter’. This racism is real and still exists today in Ireland. In my view, the Irish Government are not doing enough to stamp this out and prosecute the minority of people who are perpetrating these terrible crimes.

We at AMRI have been working over the past few years to highlight, to the Government, the widespread and systemic racism that many mixed race children experienced while growing up in Irish institutions and orphanages. We believe this issue was never adequately addressed in the past

Investigations into Child Abuse in the institutions, (for example why were so many mixed race children left to live their whole childhoods in institutions rather than be adopted into loving families), which is why we now feel is the right time to raise the issue at a United Nations level, particularly given the continuing prevalence of racism in society today as I mentioned above.

The UN have a Committee called the Committee on the Elimination of Racial Discrimination, ‘CERD’, which is a body of experts who monitor the implementation of the ‘Convention on the Elimination of All Forms of Racial Discrimination’ by its State parties. Countries, such as Ireland, who have signed up to this Convention have an obligation to report to CERD on how it is meeting its obligations under it.

The Irish Government has prepared its State Report for CERD and will present this to CERD in Dec this year. CERD will respond to the Irish government and, as this is an expert body, they are in a position to support and give constructive recommendations on how the Irish Government can best combat racism. CERD also welcomes charities and NGOs to attend and give their side of the story separately. AMRI are taking this opportunity to do just this.

Why?  We were disappointed that the Irish Government had ignored our request to raise our issues to CERD in their report and the fact that the current Commission of Investigation into Mother and Baby Homes are currently investigating racism in these institutions following our lobbying. It therefore seemed to us that the Government wants to continue to hide issues on racism in these state institutions. At the very least Countries have an obligation under the Convention to consult with NGOs on their Reporting and we feel they have not properly done so in our case. So we decided to do our own ‘Shadow Report’ which has now been submitted to CERD for consideration. We have now passed the accreditation process and are approved to attend the session at the UN in Geneva on 2 and 3  Dec 2019.

This is a milestone for us. It is not an adversarial process but rather a way of opening up a dialogue with our own government at an international level on such an important issue. This is not a legal or political action it is merely a way to prompt CERD to help our country with this difficult matter and perhaps to give our government advice on how best to support us and provide justice to those who still suffer the impacts today of a traumatic childhood situated within a racialized system.

As we are a small unfunded charity AMRI have launched a ‘GoFundMe’ campaign to raise funds for a delegation of us to attend this important session at the UN in Geneva.

Please can you support us by donating to us at this link: https://www.gofundme.com/f/AMRIUN

Many thanks and best wishes

Trustee at Irish in Britain

Bio:  I was born in Dublin, where I trained as an accountant in practice. I emigrated to the UK in 1988 and worked in several finance positions in Industry. Currently a financial consultant at a Development/humanitarian aid charity called ‘Viatores Christi’ based in Dublin. Board member and Treasurer of AMRI and Chair of the Health Committee at the Collaborative Forum in Dublin related to Mother and Baby Homes.