The 2015 London Rose is Aisling Hillary a ‘Galway Girl.’

Congratulations to Ashling Hillary a great friend of the Celtic and Irish Cultural Society, on been chosen as the 2015 London Rose. 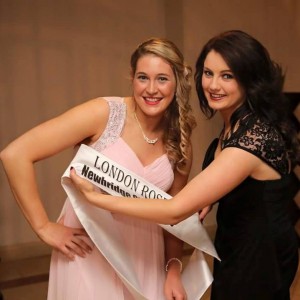 Aisling is presented with her sash by last year’s rose Seoirse Ni Fhaitnain.

Ashling was chosen from 14 girls as the 2015 London Rose at the famous Crown Hotel in Cricklewood. The 27 year old doctor from Galway now based at London’s Chelsea and Westminster hospital will go forward to the ROSE OF TRALEE regional finals in Portlaoise at the end May.

Aisling was born in Leidschendam in Holland and returned at the age of 14 to Co Galway with Irish parents Angela from Newinn, Co. Galway and Tom from Castleisland, Co. Kerry. During her childhood in Holland she was part of the Redmond School of Irish Dancing and performed at various events in the Benelux countries. She always showed a passion for Irish Dancing and Music, and although originally classically trained on the violin, started learning Irish Trad tunes during her teen age year, and at the same time found a love for singing.

After sitting her Leaving Cert she studied Medicine at the Brighton & Sussex Medical school for five years, graduating as a doctor in 2010. 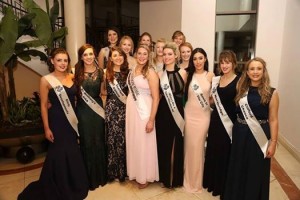 In Brighton, she joined the County Brighton Irish Society and made some great friends there including the fantastic Irish writer and musician Carmel Walsh-Davighi, and with Mollie Wood they formed The Celtic Ti-grrs. We all recall that fantastic ‘Super Irish Saturday’ in Brighton where they supported the Saw Doctors, in playing for the Irish Cricket Team when they were over playing in Hove. Her time in Brighton introduced her “to great characters like Tighe Galvin, Bridget Whelan, Garvan Hickey and John O’Reilly.”

Her first job as a doctor was at East Surrey Hospital, in Redhill, Surrey and when she moved to the area of Redhill joined the Celtic and Irish Cultural Society Crawley attended the many Festivals and Fleadh and found “the Crawley Crew and John Nolan very welcoming.”

She’s a well travelled lady and whilst at University worked in Australia, Zambia back in Galway and parts of Kent as well as helping with charitable organizations. She is big into sport having done the London to Brighton Bike Ride a few times and when time permitting does the odd Half -Marathon. On moving to the Chelsea and Westminster she has joined the South London Irish Dancing School and now plays Gaelic with Fulham Ladies. 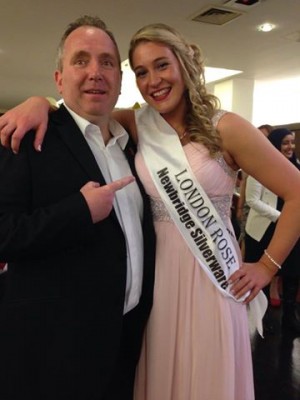 Aisling with MC Brendan Hennessy at the After Party.

Her escort on the London Final night was boyfriend Seamus Loughrey and some 19 friend and family members including her mother and sisters Orla and Louise. She hit it off well on stage with Brendan Hennessy the MC and wowed the audience in singing ‘Song for Ireland’ as her party piece.

Aisling was sponsored by North London pub, the Claddagh Ring, and hopes to kick start a traditional Irish music feature at the venue as part of her year as the London Rose.

She is extremely excited about the future and is looking forward to representing the London’s Irish Community (and the surrounding areas) over the coming year, and particularly in Portlaoise Regional Finals at the end of May… and hopefully Tralee in August!

“It still has not sunk in,” she said. “Initially I was in complete shock when the judges called my name. When I saw my family and friends jumping around I was completely overwhelmed. I have received over 200 emails, phone calls and text messages since the announcement and my great aunty and uncle have been driving around our local village in Galway telling everyone.”
She added: “I’m really excited and looking forward to going to Ireland where a lot of family and friends will come along and support me. The London journey was very exciting and I met 13 other beautiful girls, I just cannot imagine what it will be like to meet 72 others from all over the world next month.”

We wish her the best of luck on ‘her journey of a lifetime.’