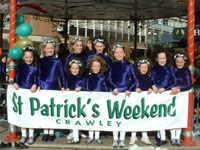 The Crawley Saint Patrick’s Weekend 2004, was the first of its kind to take place in the area and was intended to demonstrate Irish culture to the town.

The Saint Patrick’s Celtic Weave on Saturday 13 March at the Friary Hall, was a sell out. The award winning New Ross and District Pipe Band presented a show that combined together different forms of Irish dance, story, song and music for a truly unique experience. Event sponsors Gerry Hickey from Coinford Construction commented:

“I have never seen anything quite like it, it was unique. It was clear that the New Ross Band were amongst the best in the world”.

The first ever Foundation Developments Limited Saint Patrick’s Parade took place on Sunday 14 March 2004 from 1pm. Marchers from Saint Wilfred’s School, Mullins Dance School and the London UN ex-servicemen took part. The marchers numbered in their hundreds and it was a great success. The Mayor of Crawley, Brian Quinn, led the Parade with his wife Susan ahead of the award winning New Ross and District Pipe Band.

The free open-air concert, Celtic Experience,kicked off 2pm-5pm in Crawley BR Station Car Park. The weather didn’t dampen spirits but dampened everything else. Mayor Brian Quinn led the ‘Sack the Bouzouki’ band in song with a rendition of ‘Wild Rover’ and the U2-like group Us4 concluded with ‘It’s a beautiful day’.

“The weekend was organised for the benefit of the people of Crawley and the surrounding areas. Much was free, paid for by sponsors Foundation Developments, Coinford, L F Nugent, O’Farrell and Bank of Ireland. Whilst we couldn’t control the weather for the concert on Sunday, the Parade was a great success. With the support of the council and sponsors, we look forward to next years weekend when the weather will be more favourable!!! We’ve spoken to a few priests and they’re putting in a good word.”