It was celebrations all round as the Celtic and Irish Cultural Society took the honours at the recent Crawley Observer Community Awards at a gala event in The Hawth Theatre recently.  After months of preparation and with 300 nominations to consider by the judges made up of council officials, business leaders and staff of the Crawley Observer, the winners of the 15 categories were presented with their awards during an emotional and inspiring night compered by Hawth pantomime director Paul Hendy 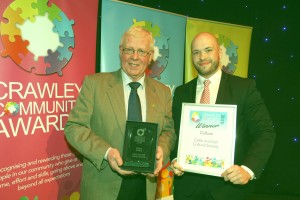 John Nolan accepts the award for Culture from Leader of the Council, Cllr Peter Lamb

A great cheer from the audience saw John Nolan come forward when Paul Hendy announced the C.I.C.S. as the winner of the Cultural award..  “For their ongoing work in promoting Irish Culture to Crawley and the broader South East of Britain in a way the whole population of the area can be part of.”

It was a fitting end to a year that saw a packed programme of events with a great Irish slant to it.

After receiving his award on stage by leader of the council Cllr Peter Lamb John was asked by Paul Hendy on stage as to what motivates him in his role with the Celtic and Irish Cultural Society,  He replied…

“We are absolutely honoured to receive this award…

Crawley has a great Multi-Cultural mix to it and its against this backdrop Celtic and Irish Cultural Society events such as the Crawley Irish Festival and Crawley Fleadh thrive.  Alot of our attendees are from a cross section of the communities of Crawley as well as being Irish and we are delighted to be part of that success in promoting all that’s good about our culture.”

As event organisers, the Society presents large-scale events in demonstrating Irish Arts and Culture to the area. Crawley Fleadh is a two-month programme where different aspects of Irishness including education programmes, sports coaching in schools, Irish language for adults, music & dance workshops, free public entertainment are targeted towards Crawley’s broad cultural population. The annual Crawley Irish Festival now in its 21st year attracts approx 6000 featuring a variety of activities including traditional and popular music across 3 live stages with sporting demonstrations, children’s entertainment and live Irish dance. A social study ‘The Irish Road to Crawley’ looking at The Irish who have settled in Crawley is a work in progress project at present. In the past, the town has seen successful St Patrick’s Day parades as well as a cross community football tournament and a cross-currents musical project.

Chairman of the Celtic and Irish Cultural Society, John Nolan with his wife Noreen and grandsons Dane and Ben after the awards ceremony.

After the ceremony, the Society’s chairman John Nolan said:

“Crawley’s people make the town what it is today and it’s the Irish and our past generations who have contributed greatly to this. Ireland is well known for its emigration and as a result we’ve seen a large community settle here following the passing of the New Towns Act of 1946 which created the town we now call Crawley.

These pioneers of the 50s and 60s have brought their Irishness here and its on their legacy we now continue to grow the cultural and social community of today.

The town has witnessed various communities settle here and it’s these groups working together that have made the town a real success. We are very proud of that.

We want to acknowledge their generations and add value to their lives in a way they will feel at home and be proud of.

Our cultural events attract interest from people of all backgrounds across the region. They look forward to what we do and the welcome they receive. Being part of this event tonight and being on stage confirmed that, and we will continue doing our best to pass on that legacy in keeping the flame lit.”

The Celtic and Irish Cultural Society was set up in early 2003 with the remit to promote and support Celtic & Irish events in the Southeast of England in working closely with the Local Borough and County Council and Irish Embassy as well as the local arts and cultural groups.  Although not a welfare organisation as such the society liaises closely with statutory authorities to ensure that matters affecting Irish emigrant populations are addressed.  Its activities are key to addressing social inclusion to integrate the Irish community more fully into Crawley’s multicultural society and provide opportunities for social interaction and creative expression to help people develop social skills, build their confidence and lead more active and healthy lives.